Home » Blog » It’s Christmas Time, But not for Christians in the Mid-East

It’s Christmas Time, But not for Christians in the Mid-East 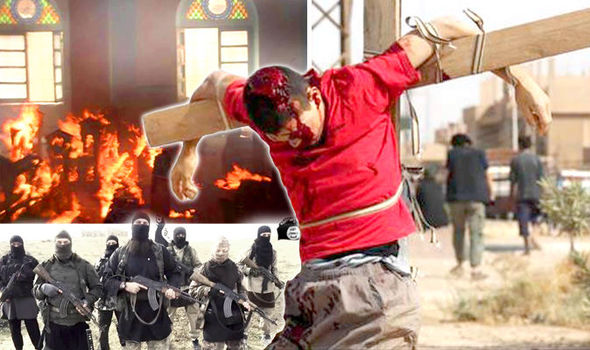 As you sit with your families and loved ones on Sunday to celebrate Christmas, spare a thought for the Christians in the Middle East that have been targeted for genocide and extinction by ISIS, who have those have been raped, tortured and crucified simply because of their faith.

Close your eyes and think about the two Christian women who refused the demand by ISIS terrorists to convert, and were publicly raped and were then beheaded along with six Christian men.

Or the  12 year-old boy that had his fingertips cut off and was later crucified together with his father for not renouncing his religious affiliation, or the 21 Christians who declared their faith in Jesus and were beheaded, their death broadcast in a video titled, “A Message Signed in Blood to the Nations of the Cross.”

Such heartbreaking stories of “convert or die” and unspeakable barbarities, have come to personify the plight of indigenous Christians in the Mid-east who have nowhere else to go.

The alarming rate in which these ancient communities are being eradicated by the monstrous killing machine of ISIS has led the New York Times to ask, “Is this the End of Christianity in the Middle-East?

As the region spins out of control, ISIS has warned Christians, “You will not have safety, even in your dreams, until you embrace Islam.”

Victims of an evil campaign of ethnic cleansing, in the very region where Jesus walked, Christians and the Yazidis have been sexually enslaved and tortured,  have had their children abducted, and have had their houses of worship plundered and destroyed and   clergy assassinated.

Jihadists have been signposting Christian homes with the Arabic letter ‘N’, giving individuals less than 24 hours to flee, or face a certain death.

This chilling practice visibly resembles the yellow Star of David that the Nazis forced Jews to wear so as to distinguish them from their neighbours.

Yet the media has not turned the spotlight on this crisis, rarely reporting on the mass slaughter and carnage,

Worse, the world seems to have forgotten this tragedy, with very little international protests recorded.

The Obama administration did not seize the high moral ground, for years stubbornly sidestepping the pleas to label the systematic annihilation and persecution of Christians in the Mid-east as genocide.

For most observers, this was a no-brainer.

The 1948 Genocide convention, to which Australia is a signatory, defines genocide as acts, “committed with intent to destroy, in whole or in part, a national, ethnic, racial or religious group.”

It was only recently that it relented, after pressure from the US House of Congress, the European Parliament  world leaders, Hilary Clinton, and several Republican presidential nominees who agreed that genocide was the right term.

In a watershed moment, John Kerry used the word genocide, the “crime of crimes”, to describe the horrors visited on Christians and other religious communities at the hands of ISIS.

Pope Francis has noted that, “Today we are dismayed to see how in the Middle East and elsewhere in the world many of our brothers and sisters are persecuted, tortured and killed for their faith in Jesus. In this third world war, waged piecemeal, which we are now ­experiencing, a form of genocide is taking place, and it must end.”

Indeed, it’s not only in the Mid-east where Christians are suffering and dying.

A Pew Research center report noted that Christians are the world’s most persecuted and endangered religious group.

In Yemen this year, four nuns in a Catholic retirement home established by Mother Theresa were among 16 people who were first handcuffed and then shot in the head

The Holocaust and subsequent genocides have taught us that we must never be bystanders to injustice and never turn a blind eye to a culture of hate.

While the Nazis concealed the diabolical agenda, ISIS delights and boasts of the pain it inflicts on YouTube and Twitter, seeking to instil fear in our hearts and recruit young people

This is a defining moment for humanity.

Statements of concern and condemnations ring hollow if they are not followed by concrete actions.

What is called for is an urgent global response to protect the weak, the voiceless and the vulnerable, and to preserve the heritage of 2.2 billion of the world’s inhabitants.

Efforts to physically destroy ISIS must be increased and safe havens should be created for those facing extinction and who nowhere else to go.

Our government cannot abdicate its moral duty and turn its back on those standing alone.

In addition to a resettlement program, countries can prioritize the absorption of desperate, homeless Christian refugees from the region by opening their doors even wider .

Nazi hunter Simon Wiesenthal once said that in the world to come, when he would meet the millions of Jews who died in the concentration camps, they will ask “‘What have you done”.

“I did not forget you’, he would  reply.

What will you say?