Home » Articles » Global anti-Semitism: making sure ‘Never Again’ is not a hollow slogan

Global anti-Semitism: making sure ‘Never Again’ is not a hollow slogan 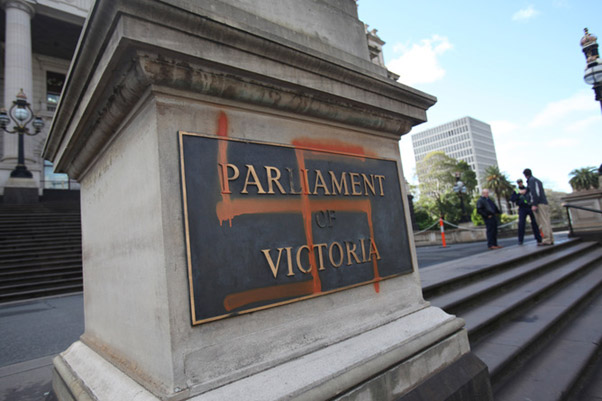 A recent report shows that anti-Semitic attacks worldwide were up by 30% last year, and that the number of anti-Semitic incidents in Australia in that time almost doubled.

The report – released by the Tel-Aviv University’s Kantor Centerfor the Study of Contemporary European Jewry – noted that 2012 saw “an alarming rise in the number of terrorist attacks and attempted attacks against Jewish targets, and an escalation in violent incidents against Jews worldwide”.

The head of the Kantor Center, Dr Moshe Kantor, said:

As a Jewish leader, I can say that the [Jewish communities] in Europe are in danger. People are afraid to go to synagogue, to go to Jewish school — this is a new phenomenon and it is joined by several other trends we haven’t seen before, like the fact that neo-Nazi [parties] have not only become legal in Europe, they’re already holding parliament seats in Hungary, Ukraine and Greece.

This news came as communities around the world observed Holocaust Memorial Day, honouring the six million Jews who were murdered by the Nazis and their collaborators simply because they were Jews. The solemn occasion also honoured those who survived, and the courageous rescuers and liberators of the death camps.

In Europe, anti-Semitism is rearing its ugly head again to frightening levels. In France last year there was a disturbing 82% rise in physical and verbal assaults against Jews; in Hungary, the neo-Nazi Jobbik party is now the third-largest political party in the country. Marton Gyöngyösi, one of its members, has argued for the establishment of a “registry” of Jewish MPs and government officials in Hungary since they constitute a “national security threat”.

There are daily reports of Jewish cemeteries and memorials being vandalised and desecrated, and the UK and Belgiumrecorded one of their worst years for anti-Semitic incidents and complaints.

Meanwhile, a report released last month by the Australian Online Hate Prevention Institute notes that anti-Semitic activity on social media like Facebook is a growing phenomenon.

Worryingly, the report also found that while some Facebook “hate sites” are taken down almost immediately, others remain online, some for more than six months. The report identifies what Facebook removes and what sort of content Facebook does not consider hate speech and refuses to remove.

And this month, in an interview with a Polish historical magazine to mark the 70th anniversary of the Warsaw Ghetto Uprising, Polish professor Krzysztof Jasiewicz stated that: “the dimensions of the German crimes were only possible due to the active cooperation of the Jews in the process of the slaughter of their people”.

Jasiewicz went on to say that he was not willing to debate these issues, since:

it’s a waste of the time we would devote to a dialogue with the Jews, whose sense of superiority and confidence that they are the chosen people are leading them to oblivion.

The Holocaust is unique in human history. For the first time, a war of industrialised, institutionalised extermination against an entire population of men, women and children became state policy.

The Final Solution was planned in the 1942 infamous Wannsee Conference. In a polite atmosphere and setting, 15 Nazi politicians and administrators – in just two hours – planned the total eradication of the Jews of Europe and endorsed their murder by poison gas.

The Holocaust was conscious, it was deliberate, and it was funded and carried out as a top priority by a government elected by its citizens in a country renowned for its contribution to science, literature, music and philosophy.

Hell bent on destroying every single Jew in Europe, Nazi Germany executed the Final Solution using its modern industry and military. Their national project of liquidation slaughtered one and a half million Jewish children, as well as millions of Poles, Soviets, the Roma, Jehovah’s Witnesses, homosexuals, the handicapped and mentally disabled: anyone deemed less desirable.

As Jewish philosopher Abraham Heschel once said, his problem was not so much where was God, but where was man during the Holocaust.

The Holocaust was the darkest instance of man’s inhumanity to its fellow man. It still serves as a stark reminder about the deadly consequences of intolerance.

The Holocaust teaches us that “Never Again” means standing firm and taking decisive action to fight prejudice, bigotry and hatred whenever and wherever it happens.

The Holocaust also teaches us that it happened because of the inaction of bystanders who were complicit by their silence. We learn that indifference is the final element for mass murder to prevail.

All Australians must actively rededicate themselves to make certain that hatred and bigotry against a Jew, a Christian, a Muslim – against any race, creed or colour – is never left unchecked or unchallenged.

There will be those who will say that the Nazi atrocities happened so long ago, that they happened in Europe, that it happened to Jews and others but not to us.

So why should we care about the suffering there and then, or about Darfur now? What does this have do with us here in Australia?

The answer is that if we remember the Holocaust, we can prevent such horrendous acts occurring in the future by reflecting on our own moral responsibility.

Over the last few weeks, MTV has been airing a range of commercials. One of them, titled Subway Roundup, is set on a NY underground train. Suddenly, the lights go out; the passengers are frightened, unsure of what is happening. The car moves from side to side, evoking memories of the trains that took Jewish people to the Nazi death camps. When the train arrives at its destination, officers with machine guns and dogs are waiting outside. They order and push the riders to form an orderly line. The final image of the modern day passengers dissolves into that of the Jews in Nazi Germany.

As the commercial ends, the message across the screen is: “The Holocaust happened to people like us”.

We must choose to act. Inaction is not an option.

This article was originally published in The Conversation, April 14, 2013