Home » Articles » Despair after a decade of disengagement

Despair after a decade of disengagement 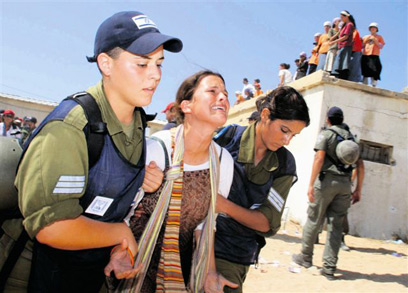 Recently, I have been reflecting a lot about the 10 year anniversary of the unilateral pull-out from Gaza.

The despair I have been feeling has been compounded by the murder of Ali Saad Dawabshe and the injuring of his family.

Back in 2005, despite huge misgivings, I cautiously backed Sharon’s plan.

I thought it was demographically, strategically and diplomatically smart, that the benefits Israel would reap would outweigh the costs and the trauma caused to Gush Katif residents.
Like others, I bought the argument that Israel would be able to fight more effectively if attacked from Gaza and that the world would back the Jewish state’s right to defend itself.

The prevailing sentiment was that Israel could not go on risking the lives of soldiers protecting the thousands of Jews living there surrounded by 1.4 million Palestinians.

I recall Sharon’s words in 2004 that, “the purpose of the disengagement plan is to reduce terrorism as much as possible, and grant Israeli citizens the maximum level of security.”

One of the security payoffs for Sharon was the 2004 letter from Bush, later endorsed by both houses of congress, that promised to back Israel on the return of the refugee issue and assured Israelis that, “There would be no return to 1967 and Israel could keep the major settlement blocks”

It was the ultimate land for peace move, giving the Palestinians their own state and the opportunity to turn the strip into a thriving economic powerhouse.

It sounded nice, did it not?

Yet, these deeply flawed assumptions bore almost no relation to reality.

It was a mistake to believe that western values and the ceding of territory would be welcomed and embraced by fundamentalists devoted to wiping Israel off the map.
It is now clear that the withdrawal turned out to be a colossal disaster that led to chaos, death and destruction.

A fiasco that cannot be undone, it created a perilous vacuum that has been filled by Hamas and al-Qaeda and ISIS affiliates.

Like Oslo, which brought waves of homicidal bombings that claimed the lives of more than 1000 Israelis, the disengagement brought more than 15,000 rockets fired from Gaza.
Weakening the moderates, it led to the election of Hamas (committed to obliterating the Jewish state on religious grounds) which then expelled the Palestinian Authority and turned Gaza into an Iranian military base and the perfect islamist breeding ground and hotbed.

The evacuated areas immediately became launching pads for full-on assaults against Israel, while an empowered Hamas was now able to claim that a weak and retreating Israel only understands the language of violence.

Any fair minded analysis would acknowledge that disengagement rewarded rejectionism and jihadism.

It placed a beleaguered Sderot and other “Gaza belt” cities in the line of fire, making life unbearable for too many Israeli citizens who become hostage to Hamas and accustomed to the eerie wail of sirens and late-night sprints to bomb shelters.

Despite repeated operations such as Cast Lead, Pillar of Defense and Protective Edge, Hamas has not stopped raining down missiles onto populated civilian areas, or smuggling weapons, or violating ceasefires, or digging tunnels with the aim of massacring thousands of Israelis.

Worse, the international community has given Israel zero credit for the its bold gesture. In fact, many countries still consider Gaza to be occupied since Israel insists on a military blockade to prevent the importation of weapons.

Global anti-Semitism has escalated and the BDS movement has gained ground.

And Israel is consistently condemned for its “war crimes” and “disproportionate” response to the shelling of its citizens when it re-enters Gaza to wipe out Hamas’s capacity.
Need I mention The Goldstone Report?

Also, the Obama administration, the UN and the EU are ready to throw Israel under the bus, consistently pressuring it to make even more dangerous unreciprocated concessions.

Besides, the unelected and authoritarian Abbas and his PA have continued to incite against Israel on a daily basis, have glorified terrorists as heroes and martyrs, and have avoided direct negotiations, going to the UN and other international bodies in a bid for statehood.

They still demand the whole of east-Jerusalem, every inch of the West-Bank and a right of return.

I am not alone in my gloomy assessment that Israel is the big loser.

Naftali Bennett has observed that the disengagement has taught Israel that, “he who runs from terror has terror chase after him, and that those who chase after terror will live in security.”

Current Defence Minister Moshe Ya’alon has revealed that he considered quitting his post as IDF chief of staff in protest of the Gaza evacuation, while former President Shimon Peres has said that Israel had learned from the experience of 2005 and could not repeat a situation where “we withdraw from an area and it becomes a firing range against Israel.”

Likewise, opposition leader Isaac Herzog has acknowledged that “from a security perspective, the disengagement was a mistake”.

We know that if IDF soldiers were still on the ground in Gaza, Hamas would be unable to wreak havoc on the scale that it has for the last 9 years.
Consider: no rockets have been launched from the West-Bank where the Israeli army maintains a presence.

Israel is now less secure, battling an enemy that uses children as human-shields and wants to carry out genocide against the Jews.

Dialogue with the Palestinians is in tatters as there are no real partners to negotiate with, and there is no end in sight to Hamas’s death cult, terrorist statelet.
With the Mid-east in flames, no serious Israeli leader would apply an identical approach of land-for-war and political appeasement to the West Bank and allow the establishment of a militarised Palestinian state that will breath down Israel’s neck and threaten the outskirts of Tel Aviv and Jerusalem.

Israel withdrew in pursuit of peace and quiet.

But peace and quiet never came in our time.
This column originally appeared in the Australian Jewish News on August 6, 2015